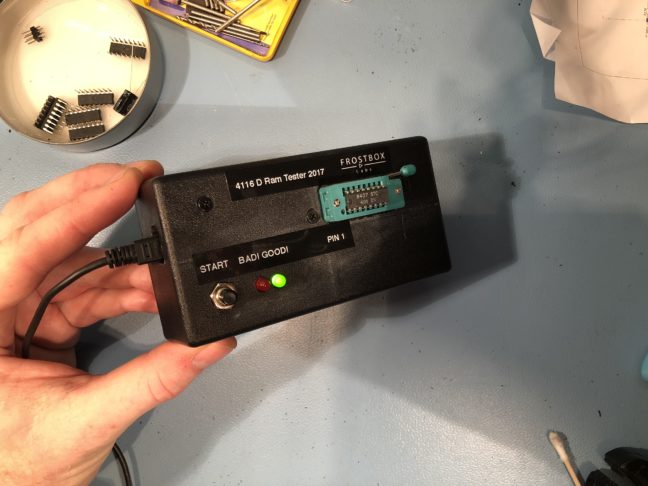 After several requests I finally got around to finish documenting an old project from the fall 2017. The ancient computer in our Solid State Logic SL4064G+ console uses a lot of 4116 D Ram which are known to go bad. Therefor I needed a way to check which IC is bad when I see a graphic error on the SSL computer screen. I looked around on the internet and found this post on a project designing a D ram tester for a different kind of D ram. Based on this design a made a version for the 4116 type D ram and reused most of the arduino code.

Please let me know if you find any errors in these attachements, thanks!

UPDATE 3: Thanks to Sleepwalker3 again for making comments about another bug. I have uploaded af fixed version of the code ei. version 3.

UPDATE 2: Thanks to Rauno and Sleepwalker3 for making comments about a very seriously bug which meant only RAM address 0 was checked. I have uploaded af fixed version of the code ei. version 2.

UPDATE: The initial schematic had errors in the inverting circuit for the -5vdc. Sorry. Below is a link to the corrected rev2 version: